Generally, in order for a sale to be valid under Shari’a the object forming the subject matter of the sale must be in existence and in the physical or constructive possession of the seller. The exceptions to this general position are sales effected pursuant to salam and istisna contracts.

A salam contract may be construed as being synonymous with the objective of a forward sale contract. Forward sale contracts are generally forbidden under Shari’a unless the element of uncertainty (gharar) inherent in such contracts is effectively eradicated. For this reason, certain criteria must be met in order for a salam contract to be Shari’a compliant. These requirements are discussed in more detail below under the heading “Key Features of the Underlying Structure”.

Although the use of salam has been, and is, utilised by some institutions for short-term liquidity purposes, its use as the platform for issuing sukuk, as an alternative to conventional bonds, is rare in comparison to some of the more prevalent structures like sukuk al-ijara. The limited use of this structure can be attributed to a number of factors, namely the non-tradability of the sukuk and the requirement that the Originator must be able to deliver certain ‘standardised’ assets to the Issuer at certain future dates which may be difficult where the Originator’s business model does not provide for this.

When structuring a sukuk issuance as a sukuk al-salam, the first step will involve analysing what exactly the business of the Originator entails and what ‘standardised’ assets (if any) the Originator is able to deliver to support the issuance of the sukuk. At the outset, if it is not possible to identify any such assets, it will be necessary to consider other possible structures (including those outlined in the other parts of this Chapter 2 (Sukuk Structures)).

As with the other sukuk structures, it is possible to structure a sukuk al-salam in a manner that provides for regular payments throughout the life of a financing arrangement, together with the flexibility to tailor the payment profile - and method of calculation - in order to generate a profit. The AAOIFI Shari’a Standards perceive debt securitisation and tradability as non-Shari’a compliant. As such, although the characteristics of salam make it relatively straightforward to adapt for use in the underlying structure for a sukuk issuance, its use remains rare in practice as the salam contract creates indebtedness on the part of the seller thereby rendering these sukuk non-tradable in nature.

As at the date of this Guide no sukuk al-salam issuances have been listed by originators on NASDAQ Dubai.

Set out on the following page is an example of a sukuk al-salam structure. 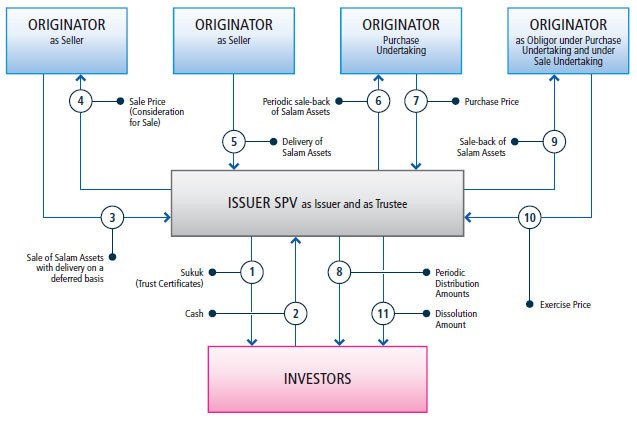 Set out below is a summary of the basic requirements based on established principles and the AAOIFI Shari’a Standards No.10 (Salam and Parallel Salam), which should be considered when using salam as the underlying structure for the issuance of sukuk:

rather than a formula would reference the market value of the assets of the Mudaraba enterprise. The use of such purchase undertakings, in effect, ensured that the Investors were almost certain to receive their principal sukuk investment and profit (subject to the usual risks such as insolvency present in any sukuk or conventional bond structure).

However, under the AAOIFI Statement, Shari’a scholars have taken the view that it is not permissible for an Originator to grant a purchase undertaking to the Trustee to purchase the Mudaraba assets for any amount other than the Trustee’s share of the market value of the Mudaraba assets at the time of sale. The premise for this ruling has been that sukuk al-mudaraba are analogous to equity-based instruments and therefore the partners in the Mudaraba must take the risk of both profit and loss. Determining the value of the Mudaraba assets by reference to the par value of the sukuk (or by reference to a shortfall amount) is akin to a guarantee of profit and principal which, unless given by an independent third party (a party other than the Originator), is not permitted under Shari’a. This ruling is another reason why the sukuk market has not seen a revival of the sukuk al-mudaraba structure.

For latest information and data on sukuk, see the IslamicBanker Sukuk Monitor.