Operation-wise also, Tabung Haji has been successful in regularly improving its core activities, i.e. Hajj and fund management. The effort in enhancing the quality of its operation is reflected in a number of local and international recognitions it has received over the years. Included among them is the Islamic Development Bank (IDB) prize in Islamic Banking won by Th in 1990. This prize is an international recognition of Th’s success in efficiently, effectively and profitably mobilizing depositors’ fund in Islamic investments. 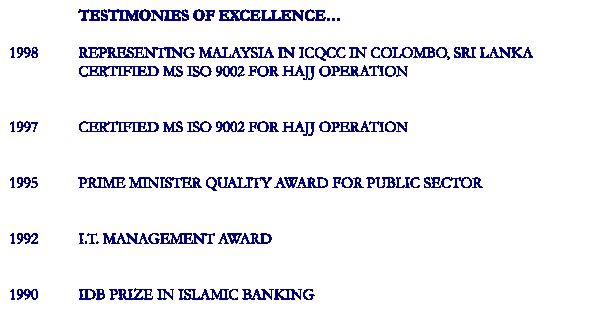 Services given by Tabung Haji to Malaysian pilgrims cover all aspects and have been accepted as amongst the best in the world. The services provided are:

Most of the operations have been computerized to facilitate administrative, Hajj, investments and accounts affairs. The computer system operations cover, among others, membership, Hajj, salary deduction for its depositors, cash withdrawal at headquarters and state offices and cash withdrawal in Saudi Arabia during Hajj as well as all aspects of internal operations.

Due importance is given to communication between Th and pilgrims. Various informative pamphlets and flyers are distributed to the pilgrims during the guidance courses. In addition, about a month before the departure of the pilgrims, cooperation is solicited from the Media the national newspapers, television and radio stations  for publishing and broadcasting articles and programs on Hajj written or produced by Tabung Haji.

The volume of these services can be gauged from the annual number of pilgrims going from the country. Before 1970, pilgrims had been making their journey by ships and continued to do so until 1976 while air flights were also available. Number of pilgrims going for Hajj until early 1970s was about 10,000 but this number roughly doubled to around 20,000 – 25,000 by 1980s. In 1990s, number rose to about 35,000 and peaked to over 40,000 pilgrims in 1992. Th is capable of handling even more pilgrims however, the present reduced number of pilgrims around 25,000 is due to the imposition of quota by Saudi Arabian authorities. 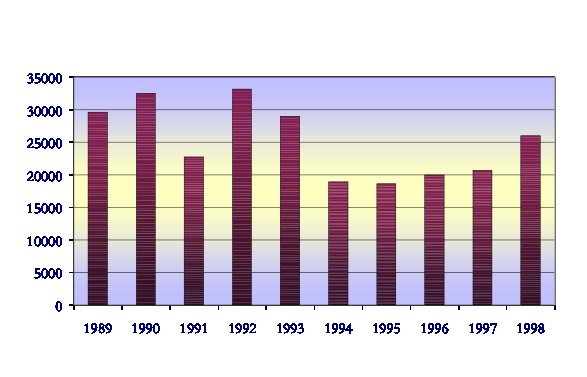 Moreover, in order to ensure the welfare, safety and health of pilgrims even during their stay at the Holy Land, Tabung Haji provides welfare and medical services handled by a number of Th and government medical officials. Transformed into economic figures, the amount required to finance every Hajj season exceeds RM200 million (US$53 million) which includes air travel expense, accommodation and food (since food is also provided by Th to the Hajis). Nonetheless, the charges are lowest per person i.e. at RM8,585  (US$2,300) compared to other countries in the region. Singapore, for instance, charges its pilgrims about RM20,000 (US$5,300) and Indonesia about RM12,000 (US$3,200). The years of experience, good infrastructure, well-planned operations, good intergovernmental relationship and economies of scale are among the factors contributing to the low cost and yet high quality services.