Although the sukuk al-murabaha structure is less commonly used in comparison to some of the other sukuk structures described in this Chapter 2 (Sukuk Structures), it could be considered as a possible alternative where it is not possible to identify a tangible asset for the purposes of the underlying investment.

In the Islamic finance industry, the term murabaha is broadly understood to refer to a contractual arrangement between a financier (the seller) and a customer (the purchaser) whereby the financier would sell specified assets or commodities to the customer for spot delivery in the expectation that the customer would be able to meet its deferred payment obligations under the murabaha agreement.

The deferred price would typically include the cost price at which the financier had purchased the assets/commodities, plus a pre-agreed mark- up representing the profit generated from its involvement in the transaction. The payments of the deferred price from the customer may be structured as periodical payments on dates specified at the outset, thus creating an income stream for the financier for the term of the transaction.

The same characteristics of the murabaha structure can also be adapted for use as the underlying structure in a sukuk issuance. Sukuk proceeds from Investors may be applied by Issuer SPV to acquire commodities and on- sell such commodities to the Originator to generate revenue from the murabaha deferred price which would be distributed to the Investors throughout the term of the sukuk al- murabaha. 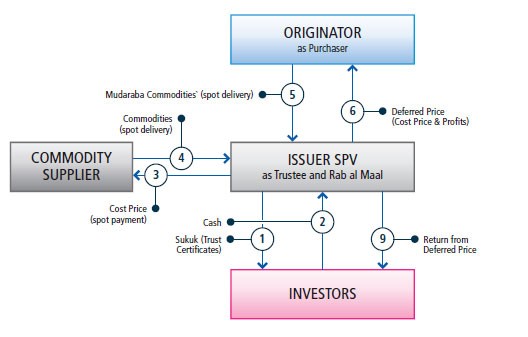 Set out below is a summary of the basic requirements which should be considered when using murabaha as the underlying structure for the issuance of sukuk:

Shari’a prohibits the trading of debt receivables, particularly when doing so at a discount may give rise to interest (riba). As discussed earlier, this limits the negotiability of sukuk certificates issued under the sukuk al-murabaha structure as such certificates essentially represent entitlements to shares of debt receivables from the purchaser of the underlying murabaha, and this structure has thus been less commonly used in recent times. However, the following should also be noted:

Despite the global downturn in sukuk issuance in 2008, issuances based on the sukuk al-murabaha structure increased by nearly 60%4 . Whilst sukuk al-murabaha issuances still only account for a small fraction of the total value of the sukuk market, the increased number of issuances suggest that the structure is still favoured for smaller deals, where the Investors are more likely to be buy-to-hold investors hence more immune to uncertainties over negotiability